Summary:
'My Advertising Pays has accused VX Gateway of stealing $60 MILLION.
VX outsourced all payment processing to third parties that it refused to disclose.
Mike signed Bank Signature cards and Power of Attorney agreements to allow VX to act on behalf of MAP and/or Mike. This allowed VX to open various Bank accounts to help process MAPS customers. VX refused to provide any copies of any signed documentation.
MAP did not have an independent Corporate Bank Account, it used VX Loop Account to manage all its funds and Customer Data.'

SO...Mike doesn't have a separate MAPS Corporate Bank Account? Seriously Mike?
And you just signed over everything..just like that? How did that conversation go down I wonder?

'Hey Timmy..you want me to sign over Power Of Attorney? Sure Buddy! You want to open Bank Accounts in my name? Hell yer...fill yer boots!
You don't want to tell me where my millions are going to?
No worries..I don't need to know that, I trust yer pal!
And paperwork? Who the hell needs paperwork haha...just clogs up my desk, right!
You just go right ahead, stick your portal on our site and just help yourself!!'

Comment:
Which means Mike must have moved. This is his new office/ house then. Half a million dollars worth.

Summary:
MAP operated in both the USA and Europe but was only able to accept payments in dollars. Around December 2015, it noticed it's US customer base was shrinking and decided to pull out of the USA market in Feb 2016 and focus on its European customers.


This meant changing from US Dollars to Euros. Shortly after this happened, VX started to place restrictions on MAP transactions and wouldn't accept payments above $6000. 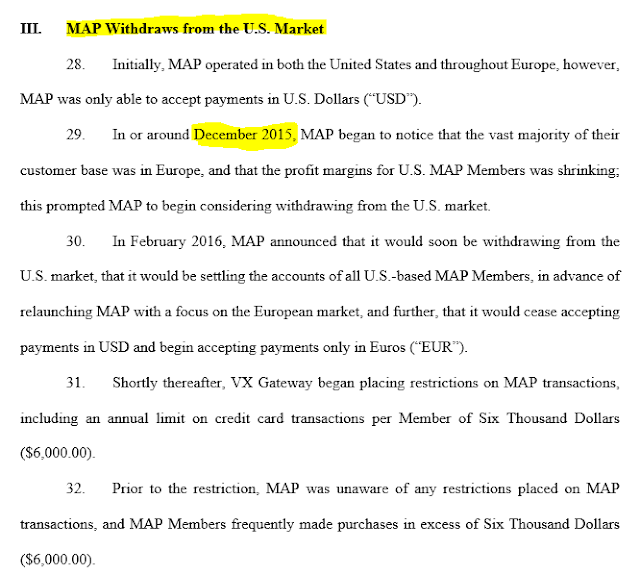 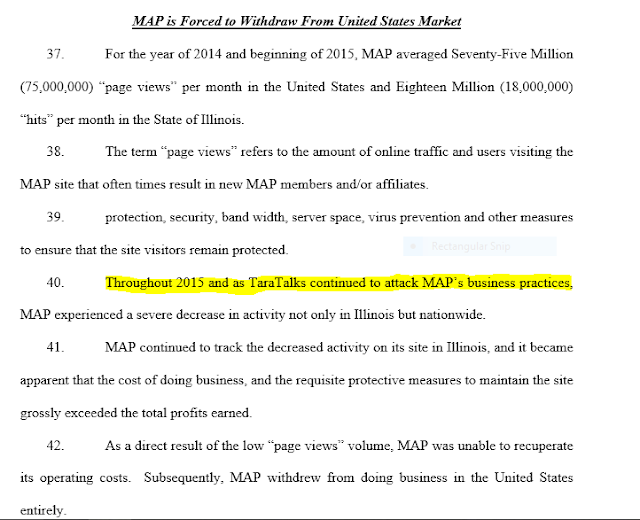 February 24th 2016:
Lynne asked Celia why there were restrictions.
Celia said that it was the first processor that VX used, that was causing the permanent restrictions, but that  VX  would use a second processor instead, with higher fees when a customer wanted to process in excess of $6000. This was the first time MAP were aware of any third party processors.At the same time, members were complaining that withdrawals were taking longer  to process and clear.
February 26th:
Lynne again emailed Celia and asked her why there was a delay processing MAP withdrawals.Celia responded that it wasn't VX fault but a problem with there correspondent Bank( Standard Chartered of New York).
March 16th:
Celia asked Mike for three months worth of Corporate statements to show to a prospective payment Processor.
April 5th:
V2.5 was launched.
April 7th:
Celia says they have found a processor for Mastercard/Euro Transactions, but Visa would follow in a couple of weeks with a different processor.
April 13th
Booth asked Celia why the MAPS vx Loop account showed a Zero balance.
Celia replied this was correct because the funds from their processor hadn't cleared and this would take between three and seven weeks.
April 13th
Booth told Celia he couldn't pay MAPS monthly expenses.

Celia said it was a system restriction that she couldn't control.

Comment:
So between Feb 2016 and April 2016, when Mike discovered that VX had done the dirty on him and wasn't actually handling MAPS  money, but passing it on to somebody else...who then, for some reason, wasn't processing it,  he just wrote another email? And then another??
This is MILLIONS of dollars we're talking about, not jump change. MILLIONS of dollars that Mike claims he has had no access to. And yet, for over TWO months, they just exchange polite emails?

Summary:
May 6th
VX withdrew $4 million from MAPS VX account.
At a lunch meeting that day, MacKay said this was a mistake and he would repay MAPS in installments of $600,000 every other week.
May 16th
Celia told Booth that payments in dollars had ceased and that she could not transfer any funds in US dollars from MAPS VX loop account.
No more installment payments have ever been made to MAP.
June 8th.

MAP try and find a different processor themselves.

Comment:
A mistake?
'Hey Mike, so sorry, withdrew $4 million by accident..these things happen you know. SO many buttons! But hey...don't you worry! I'll repay you half a million every fortnight until we're square, OK?'
'Oh sure Tim...don't you worry! It's all good!'

More to come...watch this space!