During the Second World War, a Stradivarius made in 1685, was stolen from Poland by Nazi Germany.
But in May 2018, a mystery Polish Billionaire brought the violin and returned it to Poland, gifting it to a musician called Janusz Wawrowski.

Built in 1685 in Italian Cremona, in the year of birth of Johann Sebastian Bach. In 1680, Antonio Stradivari moved with his family to Cremona, where, after 14 years of mastering his skills with his master Amati, he began his independent activity as a master of violin-making. It was during this period that Stradivari was on his way to creating violins that were perfect in both sound and form. The violin from 1685 is unique. In their construction, it runs far beyond the period of creativity called Amatiese. The form of the instrument refers to the most splendid Stradivaris from the so-called the golden period of his work.

The violin of Antonio Stradivari 1685 was owned by the Ratini family, Italian magnates from around Rome. Luciano Ratini, the nestor of the family, did not reveal the treasure for a long time. Precious violins were used only once a year by a selected musician at a private Ratinich concert. After the concert, the violin returned to the family treasury. It is thanks to this that it is currently one of the best-preserved Stradivarius in the world. The study of this 333-year-old instrument showed that all of its elements are original and there is not even one crack on them. Luciano Ratini agreed to sell an instrument inspired by the idea of ​​returning Antonio Stradivari's violin to Poland on the occasion of the 100th anniversary of Poland's regaining of Independence.

Most of the "Strads" have their own special names. This instrument has, however, remained nameless until now.

The precious instrument will be stored in the treasury and exposed at the Royal Castle in Warsaw. The patron of the art who decided to buy the instrument is one of the richest Poles who wants to remain anonymous. By purchasing and sharing these exceptional violin, he wants to celebrate the 100th anniversary of Poland Regaining its Independence.'

The mystery Polish Billionaire had been anonymous up until a couple of days ago, but a  press conference was held and the rich anonymous business man was unmasked as none other than Roman Ziemian! 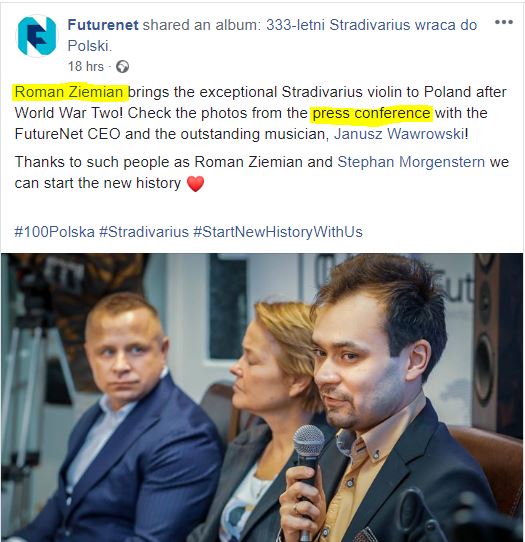 This radio podcast has an interview with Janusz Wawrowski where he claims the mystery benefactor is indeed Roman Ziemian of Futurenet:
http://www.rdc.pl/po…/popoludnie-rdc-skrzypce-stradivariusa/
I've tried to contact Janusz to ask him how he knows that Roman is the mystery buyer, considering the purchase was originally anonymous? But so far he hasn't replied... 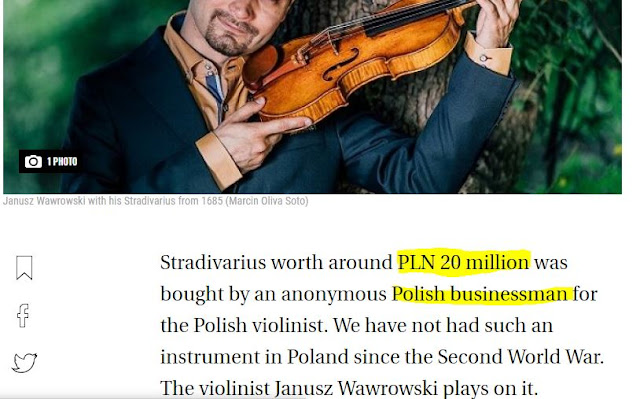 So what's odd about this story?

Well first of all, look at this post from Futurenet way back in March 2018:
It states that thanks to Futurenet this same violin:
'...can once again be hosted in philharmonics around the world...'.

This post is from March, so who owned the violin then? 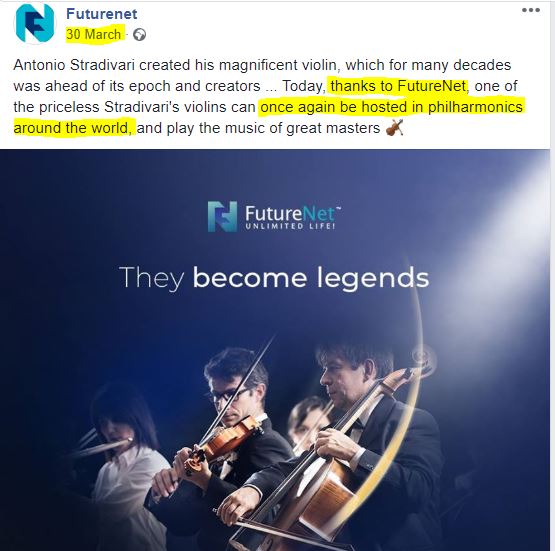 The only sense this story makes is that Roman is lying, but let's assume for one moment that he really did buy this violin.
Where did he get the $5 million US dollars from to purchase it? Futurenet? Because if it was from Futurenet, they've stopped paying out withdrawals and that money would sure come in handy for it's cash strapped affiliates.
Why did he buy it anonymously when the publicity this would have generated for Futurenet would have been massive?
Why come out as the 'mystery Billionaire' now?

My own theory:
Either Roman's lying because he knows the 'mystery Billionaire' won't ever come forward to call him out, or this is a money laundering masterstroke.

He has pleaded 'Guilty' (with a Plea bargain) to one count of:
'First Degree Felony Attempted Aggravated Sexual Abuse of a child'
He will be staying in jail until his sentence hearing, early in the New Year.


Charles has been playing the system for months.
He had a full court case arranged for October, but said he'd take a plea bargain a few days before and the court date was cancelled. 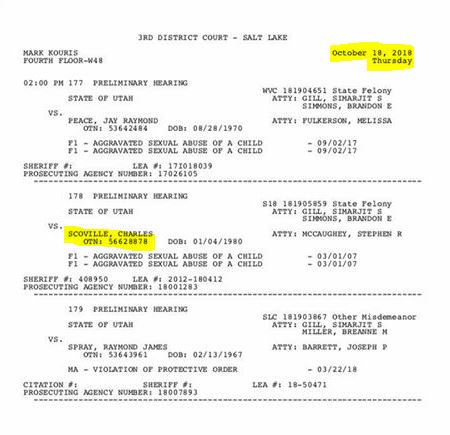 But then he changed his mind! And I think the only reason he took a plea bargain this time around was so that the details of what he'd done weren't discussed in open court.

Lets hope that now this case has been resolved, The United States Court of Appeals for the Tenth Circuit will finally be able to deliver it's verdict on the Traffic Monsoon case.