An astonishing video was released by Ryan Conley yesterday on his Facebook page.
He makes some incredible claims about Futurenet and Giles Whiting, the current CEO of Futurenet.

The Facebook video that Ryan posted has since been deleted, but I was fortunate enough to save it and it's been released below.

As some background, Ryan Conley had his Futurenet account suspended by Giles Whiting for allegedly cross recruiting for a new ponzi scam called AlterNet - an accusation that Ryan strongly denies.
They have been exchanging posts about this on Facebook for a couple of days now: 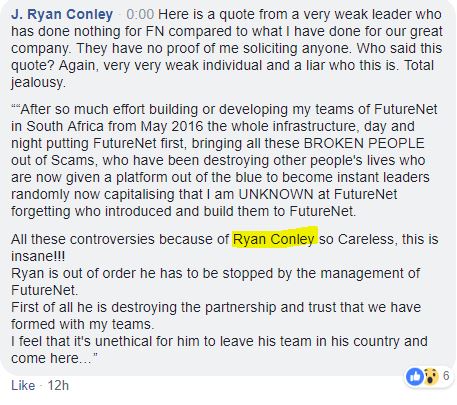 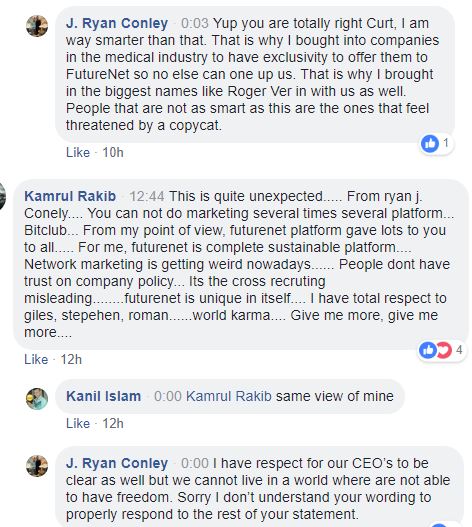 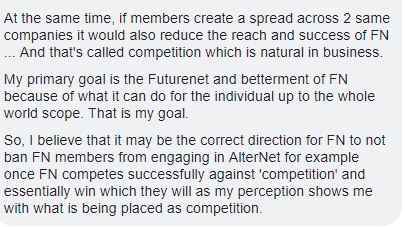 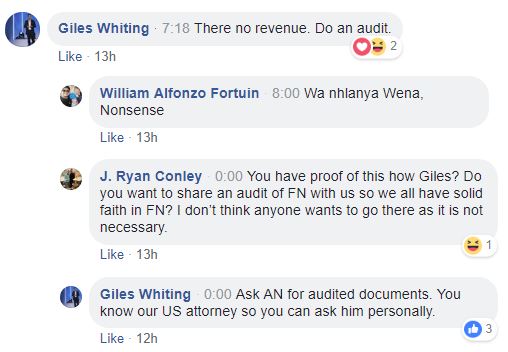 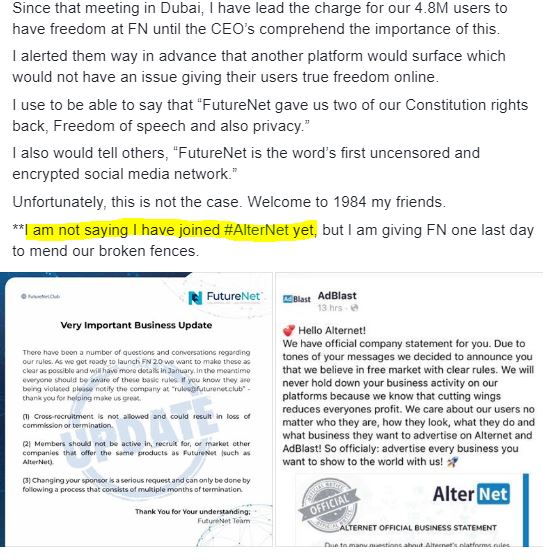 Ryan is so upset by this obvious snub that he has blackmailed the owners of Futurenet - Stephan Morganstern and Roman Zeeman - that if his account wasn't re-instated by 8am this morning, he was going to release some damning videos that he secretly recorded between himself and Giles.
In the explosive video clips below, Ryan states that:

Futurenet has been stealing millions of dollars from affiliates...

The FuturoCoin is crashing because Roman and Stephan haven't paid its creator Denis O'Neil for the work he did.

That 5000 people who brought mining contracts from Futurenet were 'suckered'!

Ryan also claims that he personally recruited the whole Chinese team and it's leaders have also had their accounts suspended for cross recruiting.


In the video below, Ryan says:

'I'm going to release some private videos...'
'I have not been shown any evidence of cross recruiting in Futurenet...'
'...(Futurenet)  is good versus evil...'
'I've had to cover my arse and the videos I have Stephan you have not seen...'
'I've built this company up bigger than anyone else in the entire company.  The entire Chinese team joined Futurenet because of me...and Vietnam...and Malaysia...and I'm closely linked to Africa...'
'I'm going to release these videos at 8am and (then) they will remove the CEO Giles Whiting...

'...I brought you guys the best programmers in the world...'
'...because when this company crumbles to the ground...I'm asking (demanding) right now that Giles Whiting resign...you are nothing but a puppet.'
'...Giles told me directly that the  only reason the Futurenet Foundation was created was so that Stephan and Roman would feel good about the amount of money that they have made...millions of $...'
'...Giles has removed me from Futurenet, he has banned my account...'
'...you are the one who started this war. I'm going to have you terminated. And once Roman and Stephan - who helped me build this company to where it is today - find out...'

'...this is what's going to happen. If Futurenet
does not go ahead and make whole and bring on board all my Chinese leaders that Futurenet has banned from the company for cross recruiting...I brought this to China and you have stolen millions of dollars from them...'
'...you really think this is a business model that will last forever? You have another think coming.'
'...I have flown Dennis O'Neill  over from Chicago. The reason why FuturoCoin is crumbling is because Futurenet haven't paid Dennis for his services...'
'...you guys are being stolen from on a massive scale!'
'...all 5000 people that got suckered into buying FuturoCoin mining contracts...'

'...the CEO's of Futurenet are burning this company to the ground!'
'...I am going to drop bombs on Futurenet, it's game over!'

The Video in full:

Ryan Conley has been involved in numerous other Ponzi scams which I've documented previously in these two blog posts:


And as he boasts in this video, he has single handedly been responsible for building vast teams for Futurenet  and contributing to this illegal Ponzi scams coffers.

He belongs in jail.

Update:
None of these 'private' videos have (so far) been released.

Update: 19th December 2018
FUTURENET have issued Ryan with a Cease and Desist Notice:

CEASE AND DESIST
Re: Futurenet CEO Mr. Richard Giles Whiting
Harassment, Wiretapping, Extortion
Dear Mr. Conley,
I represent Futurenet and the CEO Mr. Richard Giles Whiting. If you are represented by Counsel, please deliver this letter to them and instruct them to contact me immediately.
In the last few days/hours you have threatened our client via Whatsapp and even publicly via Facebook with violence.
In addition, you threatened to publish certain audio and video recordings of him that you unlawfully made of him, if his Futurenet accounts were not re-activated and, if he failed to apoligize to you.
My clients have secured all necessary evidence to secure claims, both civil and criminal, against you based on the following:
1. Harassment: Your conduct clearly constitutes harassment...you must stop harrassing my clients immediately.
2 Wiretapping in Washington:
Your conduct violates Washingtons wiretapping law. It is a crime to intercept or record or divulge a private telephone call.
3.Wiretapping in California...ditto.
4.Wiretapping in Europe...ditto.
5. Extortion. You are extorting my clients. Extortion is a serious crime in all juristictions. Your harrassment and your threats against my clients give rise to further criminal and civil action we are prepared to commence against you.
My clients demand that you immediately
CEASE AND  DESIST...
please confirm that you will abide by my clients demands no later than December 21st, 2018.

My clients are prepared to initiate a law suit against you...and will spare no expense to retain recourse against you.


He states:
'I'm in the middle of a lawsuit right now with the United States government over here regarding Futurenet, and I've still stood up for them...'

So the USA are investigating both Ryan AND Futurenet!
That's not going to end well!!

Ryan has issued a statement about his intentions for 2019:

'It’s my goal to slow down in 2019 and relax more and to be in live more in the moment.

It’s too easy now a days to get overwhelmed in work and every day life.

I think everyone should try this dopamine fast idea once a week but I’m implementing it even more into my life daily in a few ways.

1. I’m turning my phone off the majority of the day and on airplane mode except to return calls for an hour twice a day.

2. I’m doing more fasting each week as it’s mentioned in this vid.

3. I’m reading more, writing, and exercising more and staying off social media for the most part.

4. I’m making those close to me more of a priority and being there for them in a non distracted state.

So, if you message me or call me and it goes to voicemail or I don’t return your message right away, be aware that this is more of my approach to life this year and moving forward.

I think we can all do without the majority of the distractions in life and I have full faith that God and the universe shall continue to provide our family with absolute blessings!'


But I'm sure he'll find time for the odd bevy as well, eh Ryan?

Catch up on all of Ryans latest activities over at RealScam.com:
https://realscam.com/f11/j-ryan-conley-career-scammer-4734/index37.html