My Advertising Pays (The Advert Platform) closed down in 2017.

Since then, little has been heard of Mike Deese (USA) and Tony and Lynne Booth (UK), so for new information to surface over the last month, from two separate sources, is very welcome.

The full story of My Advertising Pays is here...

Micheal Deese started My Advertising Pays in December 2013 and closed it in 2017.
He ran the business with Tony and Lynne Booth(UK).
Tony ran the Communications side and Lynne handled the finances and together they registered a business called 'Recodeit'  Blackburn, UK.
https://taratalkstoday.blogspot.com/2017/07/tony-booth-lynne-booth-and-michael.html
Mike recognized that the key to getting away with his scam was to own his own payment processor. So he partnered up with VXGateway who were owned by Timothy Mackay and Celia Dunlop.
Together they laundered millions and millions of dollars before VX Gateway went into the fastest receivership in history and closed down in September 2016, stating that GP Data stole all their money.
After a couple of meaningless Court cases they all disappeared and affiliates lost everything.
The information I've received over the last month has been passed to me by third parties.
In 2017 Mike spent over $25 million buying Bitcoin mining equipment from China that was eventually sited in Sweden.
(You may remember that TAP were selling mining packages)
The documentation for the sale names the company as 'CoinRush Ltd', Heywood House, George Hills, Anguilla, British West Indies and 'Recodeit' and both Mike and Tony signed the papers.
The contact person for this purchase was a certain Jamie Waters.
(You may remember Jamie from the Banners Broker scam, so he has form).
The money for the sale of these packages came from two separate trusts registered to Mike. 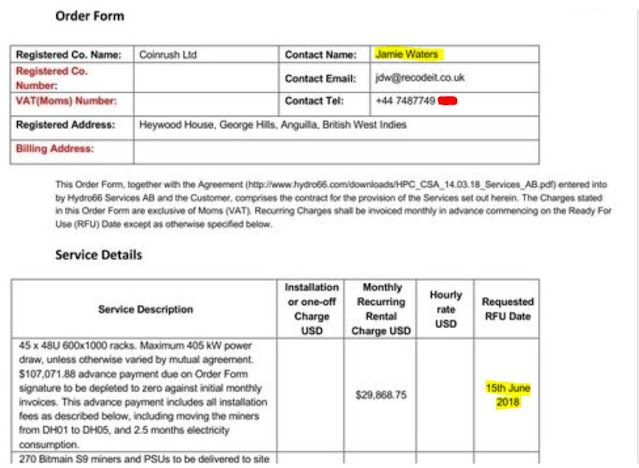 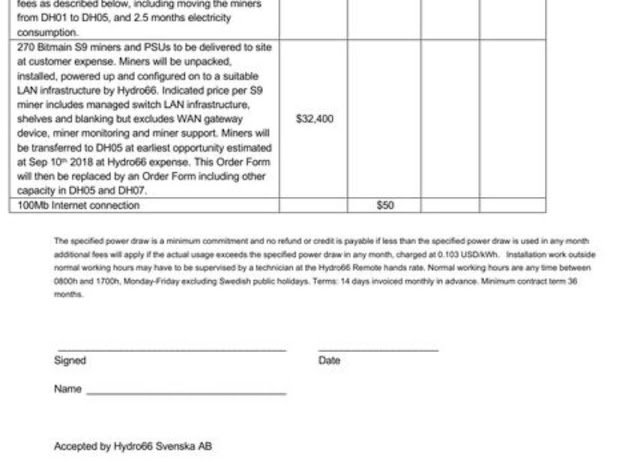 Jamie flew regularly to the Isle of Man with Tony and Lynne which confirms rumours last year that Tony and Lynne were planning to sell up and leave the UK, although we have no news confirming that they have actually left yet. 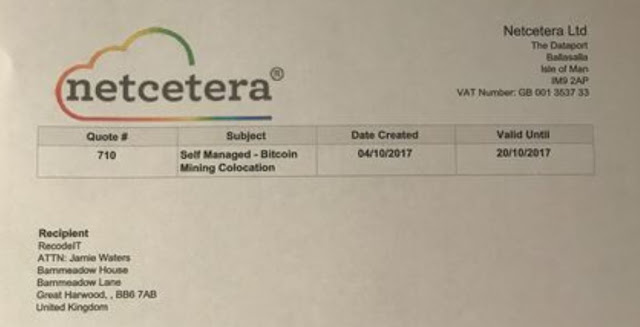 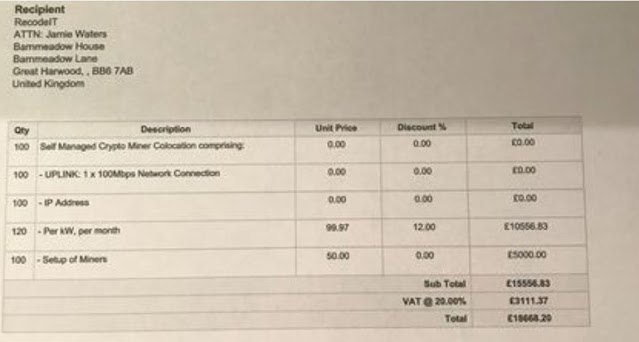 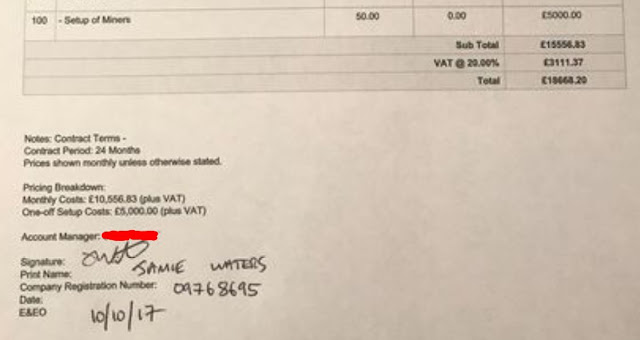 My source tells me that Jamie wasn't too fond of Tony and Lynne.
My source also tells me that he thought Jamie was a 'good, decent bloke'.
So maybe it's time to come clean Jamie and do the right thing at last?
I also have news of VX Gateway:
VXGateway still have the majority of the money made from MyAdvertisingPays in an attempt to hide the assets from authorities that could freeze it. And Celia and Timothy have done very well out of it, earning a reputed $184 million for their services.

It seems though, that Timothy has been boasting about his involvement with MAP and has been spending a little too much money on the material things in life. Word is, he's broke.
So where has all the money gone? Fast cars, lavish parties and property galore.
How do we know this? Well it seems one of Timothys friends has spilled the beans on the internet about the internal payment in the hope of selling his story, but I can't verify that little nugget of info so if anybody has the leak, I'd love to see it!
These are two properties that Tim and Celia have supposedly acquired:
4 million Euros for a house in Malta: 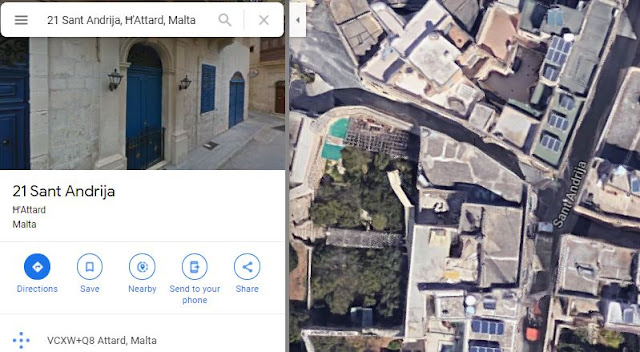 3 Million dollars for a Penthouse in Brisbane Australia: 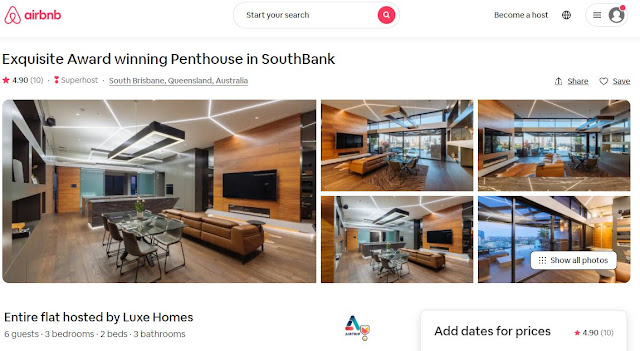 And Timothy and Celia have been busy washing money through other companies:
Vexios
https://registry.mbr.mt/ROC/index.jsp#/ROC/companyDetailsRO.do?action=involvementList&companyId=C%2075122
And they're listed as Australian Nationals according to the Malta Register: 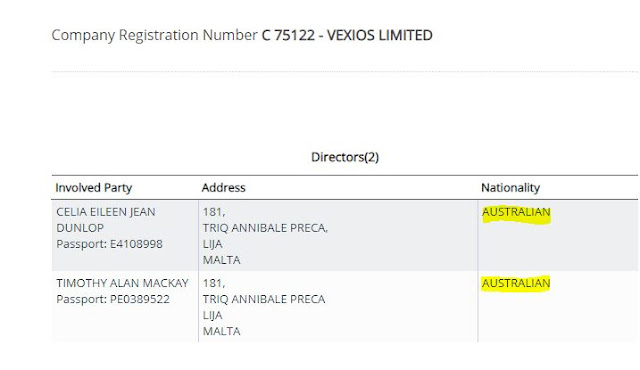 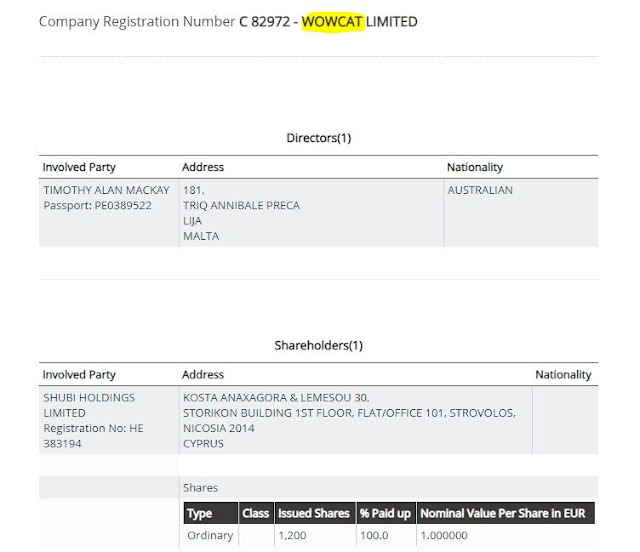 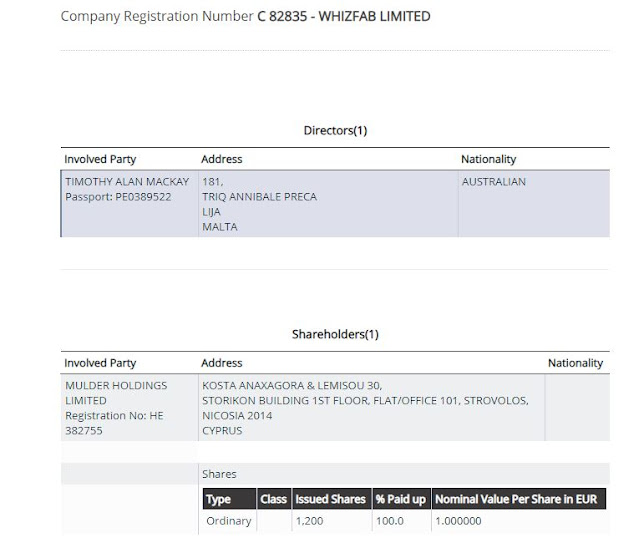 'A majority of their ill gotten wealth has been stored away in Jersey Islands in a fund called Shubi:
Shubi holdings: https://i-cyprus.com/company/538016
Another chunk of money went to the private businesses of their friends from the infamous 'manhattan club':
The ex-CTO of VXGateway and Bidlotto: JOHN W. HORN (PHD) https://www.dpiacomply.com/about-2/ for his big data consultancy business.
The ex-director of VXGateway: Luis Bello https://pa.linkedin.com/in/luisbelloc for his food business.
An undisclosed amount was passed in bribes to the MFA (malta financial authority) and MGA (Malta Gaming Authority) to licence the companies above.
This was forced by the release of the 'paradise papers' linking some of malta's businesses with Panama and its evasion of many US and European laws. Tim and Celia were revealed within these. The MFA was encouraged to release an announcement condemning MAPS and separating Tim and Celia's companies from it. Tim and Celia are linked to the directors of Hard Rock casinos. With many of the companies created to wash money being providers to Hard Rock's casinos'.
More to follow, watch this space...