Banners Broker have been caught out LYING about the processor fees they charge affiliates.

I contacted both PAYZA and STP to hear the truth.

This is what Banners Broker are telling affiliates: 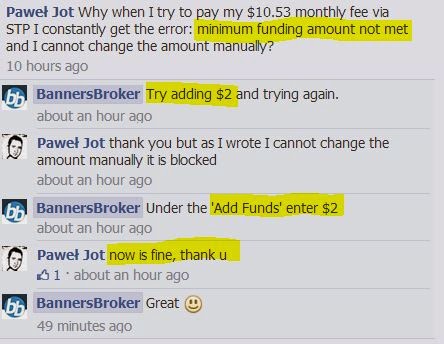 But this is THE TRUTH from STP:

And this is THE TRUTH from PAYZA: 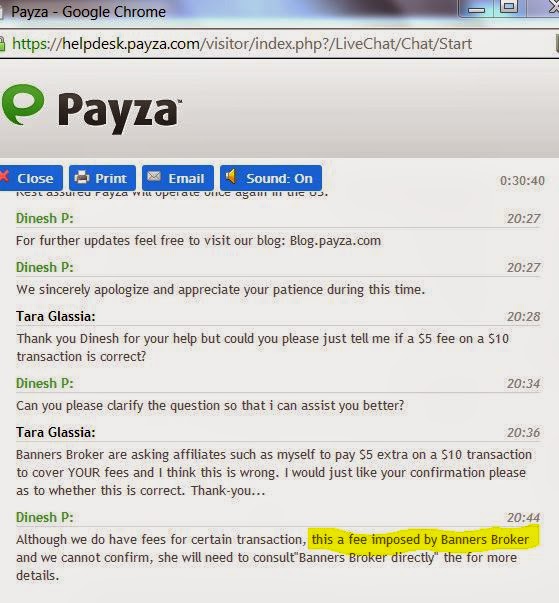 How much longer will Banners Broker get away with this?

DON'T GIVE THEM ANY MONEY!

IN THE HIGH COURT OF JUSTICE OF THE ISLE OF MAN

IN THE MATTER OF BANNERS BROKER INTERNATIONAL LIMITED (IN LIQUIDATION)

On Friday 14 March 2014 the Isle of Man Court, subsequent to the meeting of creditors and contributories, held on Wednesday 12 March 2014, it was ordered that Paul Appleton and Miles Benham be appointed Joint Liquidators of BBIL.

The Joint Liquidators are now in office and are conducting the Liquidation of BBIL in accordance with the statutory requirements.

For and on behalf of Paul Appleton – Joint Liquidator

David Rubin & Partners LLP is a limited liability partnership registered in England and Wales, Registered number OC339705, with its registered office at 26-28 Bedford Row, London WC1R 4HE
Posted by TARA at Wednesday, March 19, 2014 No comments:

Many people are asking for the outcome of last weeks creditors meeting.
A statement will appear very soon, please watch this space.
Thank you.
Posted by TARA at Monday, March 17, 2014 No comments: 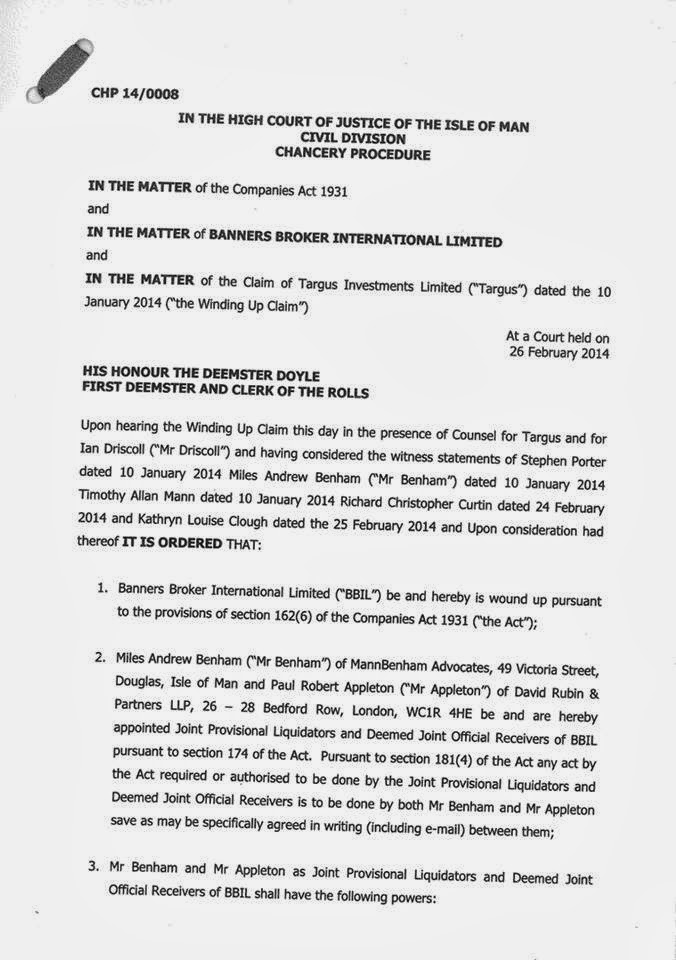 1. Banners Broker International Limited ("BBIL") be and hereby is wound up pursuant to the provisions of section 162(6) of the Companies Act 1931 ("the Act");

3. Mr Benham and Mr Appleton as Joint Provisional Liquidators and Deemed Joint Official Receivers of BBIL shall have the following powers:

a) To carry on the business of BBIL, in so far as may be necessary for the beneficial winding up thereof;

(b) To open, maintain and operate without the further consent of any other person, such bank accounts as is deemed necessary by Mr Benham and Mr Appleton;

(c) To appoint an advocate or such other law agent or legal advisor (whether in the Isle of Man or elsewhere) to assist in the performance of their duties;

(d) To pay any classes of creditors in full;

(e) To bring or defend any action or other legal proceedings in the name of and on behalf of BBIL;

4. Mr Benham and Mr Appleton as Joint Provisional Liquidators and Deemed Joint Official Receivers of BBIL shall forthwith advertise notice of this order in two newspapers published and circulating in the Isle of Man;

5. Meetings of creditors under section 179 of the Act shall be held within one month of the date of this order;

6. The costs of Targus and of Mr Driscoll of and incidental to the Winding Up Claim shall be payable from the assets of BBIL as an expense of the liquidation of BBIL.

SEAL OF THE HIGH COURT

This message went out to all creditors today.
(Please note that it isn't too late to apply:
Please contact Paul Cooper (on behalf of Paul Appleton)


IN THE HIGH COURT OF JUSTICE OF THE ISLE OF MAN

I refer to previous correspondence in respect of the above matter.

Please find below information to assist you in completing the proof of debt and proxy form.

Further notes for creditors on the filling out of forms

There are two forms to complete and return:

1) Proxy form – either a general or a special proxy

1) Proxy form
If you are intending to attend the creditors meeting in your own personal capacity in the Isle of Man, then no proxy form needs to be filled out.

If you are not intending to attend the creditors meeting, then you can elect for someone to represent you at the meeting as “your proxy holder”.

A general proxy gives the proxy holder full discretion as to how to vote at the meeting on the resolutions.

You need to submit either one of the proxy forms.

The proof of debt needs to be filled out in order for the proxy form to be valid and your vote to be counted at the creditors meeting.

If you do not send in the proof of debt and proxy by the deadline of 12:00 noon on Tuesday 11 March, you will not be able to vote at the creditors meeting unless you attend in person and have lodged the proof of debt by the aforementioned deadline.

This does not mean that you will be unable to claim in the Liquidation for the amount of money you are owed. If you do not send in the proof of debt before the deadline, you will still be able to prove your debt at a later time. Any deadline for a future submission of proofs of debt will be advertised by the Joint Liquidators, pursuant to their statutory duties.