I've written a few posts over the months about the Cashback World/Lyoness Scam and have previously written about Woking Councils continued participation in this scheme.
But despite repeated email (and various blog site) warnings, Woking Council continue to operate this scheme and have recently updated their website. 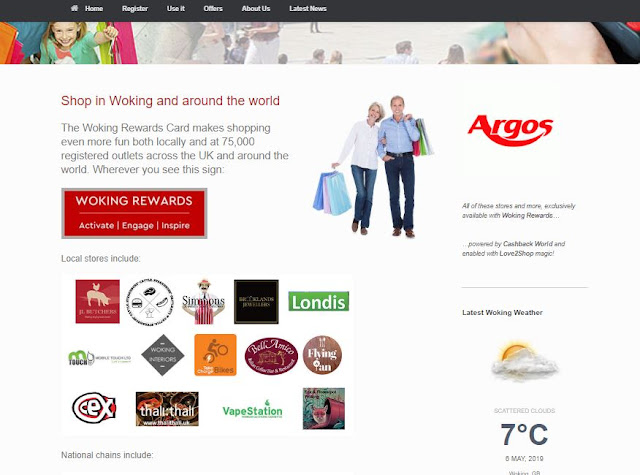 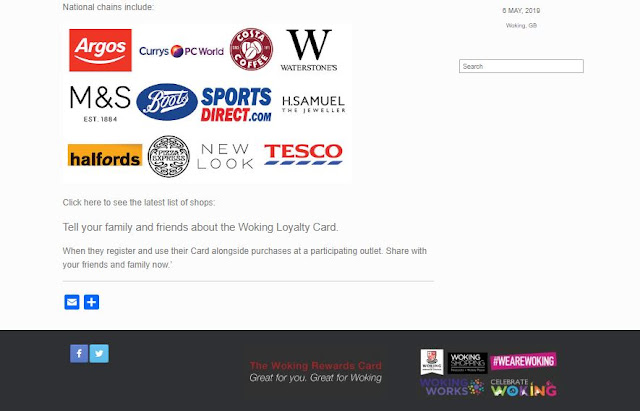 The Woking Loyalty Card is supposedly accepted at over 75,000 outlets, but I've spent many months investigating the claims that major retailers are merchants of Cashback World, and all the claims are lies.

At the time of writing that post, the only major retailer who said they were merchants of Cashback World was ARGOS.
But thankfully ARGOS is no longer associated with them and are also calling them a scam: 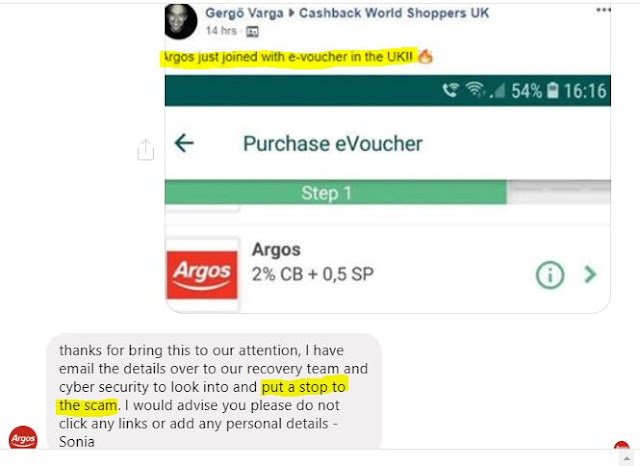 The money actually comes from Lyoness/Cashback World itself. And that money comes from thousands of people who lost money buying into 'Enterprise Clouds', an investment unit system that promises huge returns via the shopping network (referral) system at Cashback World. The problem is, it doesn't pay nearly as much as they claimed it would and in most instances, people have lost most or all of their investment.
The following comments come from a Facebook group:

'3 Clouds, and even combined they don't make a single unit.
I remember the days when our President told us it would be raining units. There are even now poor souls who think Enterprise Clouds will bring more. Oh, how they will be surprised.'

'All the changes are to delay the clouds and decrease the amount of (shopping voucher units)...in order to have balance you need to spread the vouchers to your shoppers / even that they do not use the CB card / and once you do that you can not take them back... if you don't do ...you don't have balance ... no balance ...no ESP...no payment.. and it is game over for old marketers with a lot of (shopping vouchers) .smart move..to get rid of us...'

'...failure with clouds has nothing together with building own shopping network...upline mislead us and mislead you as well..we woke up..you didn't yet... and I do have a network over 1500 people that can not use the card at over 140 merchants in my town ... This group is made for people to talk with facts... and fact is that clouds are failure...'

And you don't have to take my word for it, the 'pissedconsumer' website is full of testimonies from people who've lost thousands of pounds to Lyoness:

Cashback World /Lyoness have also been banned in all these countries:

NORWAY:
The (Norway) Lottery Authority has concluded that Lyoness is an illegal pyramid-based conversion system.'
4. June 2018

ITALY:
The promotion system for the purchase model “Cashback” Lyoness Italy S.r.l. uses, is incorrect, because it is a pyramid scheme/snowball system, which the Consumer Protection Act classifies as a definitely misleading business practice.
The system revolves around a fee-based discount card with which consumers can “save money” in certain stores. Only the leaders of the Lyoness system yielded high profit rates with the members’ “careers”.

'The judge Mathilde Beranek from the Commercial Court in Vienna, Legal Department 58.1 Vienna, convicted Lyoness as a snowball system and declared the company’s General T&Cs to be null and void (Case No. 581 Cg 44/16y-11).

... and are being investigated in numerous other countries as well:

So you'd have thought that somebody at Woking Council (which is a local government body
after all) would have done just a cursory check into the company they were dealing with back in 2017? There was lots of information written about Lyoness then, and even more now.

It was this blog post in April 2018 at 'Behind MLM' that initially alerted me:
https://behindmlm.com/companies/lyoness/woking-council-pushing-lyoness-ponzi-onto-unsuspecting-residents/

And that great post started my investigations into the retailer side of this ponzi scam:
https://taratalkstoday.blogspot.com/2018/06/how-cashback-world-loyalty-card-scam.html

The Woking website has been down for many months due to 'updates': 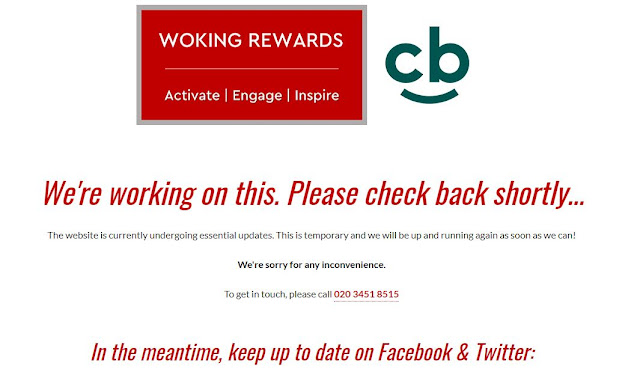 And as the weeks went by, I was optimistically hoping they'd quietly dropped this scam scheme. But no, they're unfortunately back:
https://www.wokingloyalty.com/

Although there Twitter page hasn't seen any action since June 2018: 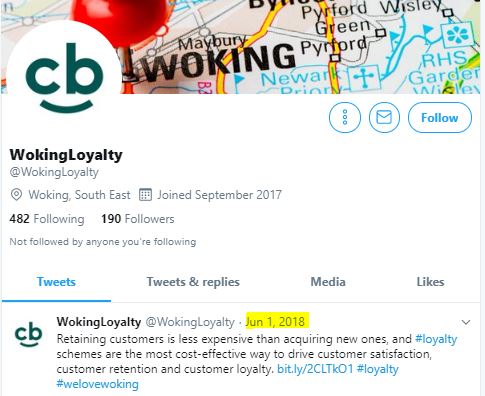 And there Facebook page has had no posts since May 2018: 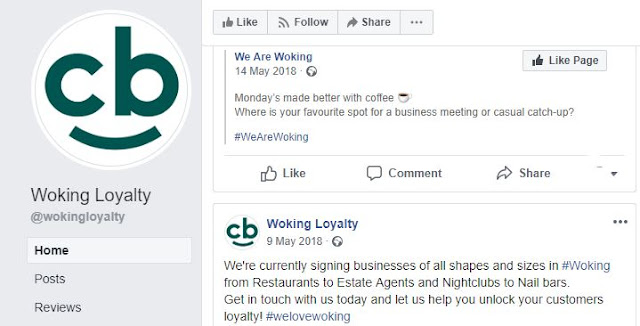 Lyoness is a Multi Layer Marketing company, which means it operates on a system of referrals and commissions. So whoever introduced Woking Council to the Lyoness scheme is on a nice little earner.
So who is this person? Well whoever it is, he/she would probably be knowledgeable in network marketing and how it works.

The first post on the Woking Loyalty Facebook page is from a man called Jonathan SA Lytle
who writes:

'There is something quite exciting happening with Woking Loyalty and I wanted to share with you all - if you haven't seen much about it so far! It's an exciting loyalty card that you can get money back when you shop and shopping points to use at shops and businesses in and around Woking. It's in very early stages at the moment but worth following and joining up soon! So why not follow to keep updated on where you can pick up the card and earn the benefits!

Jonathan has also given 'CBW Woking Loyalty' a 5 star rating!

And is a Director at this Marketing company, InfusionUK Ltd:

He also happens to be a Conservative Councillor at Surrey
Heath Borough Council: 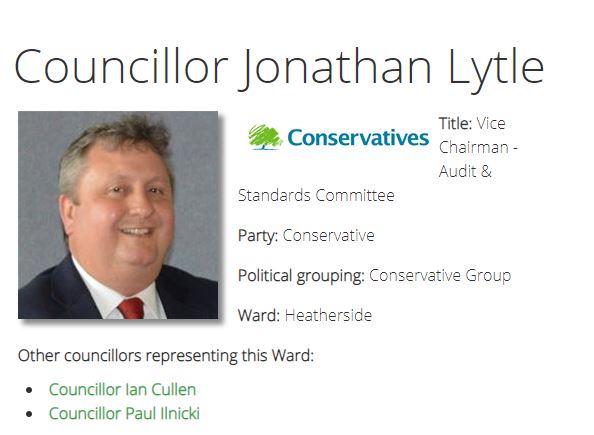 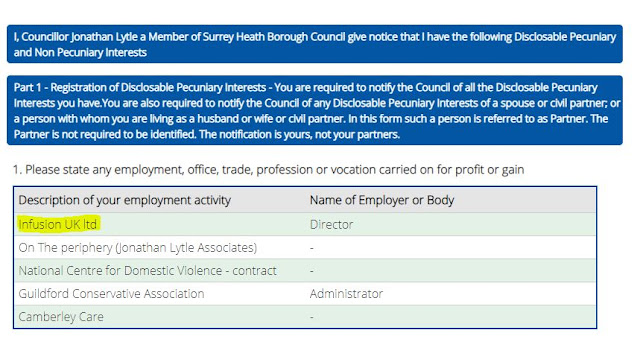 Woking Council launched this scheme in a fanfare and had an article in the local paper. 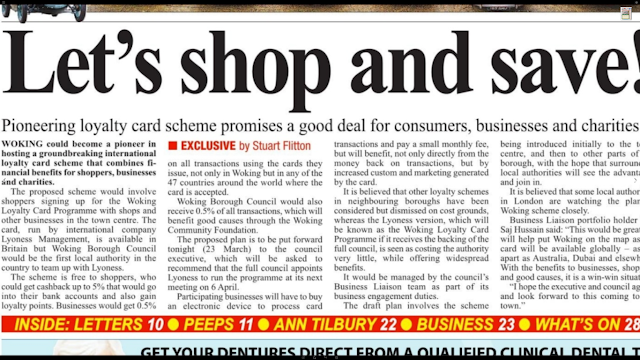 ...and displays on local stands: 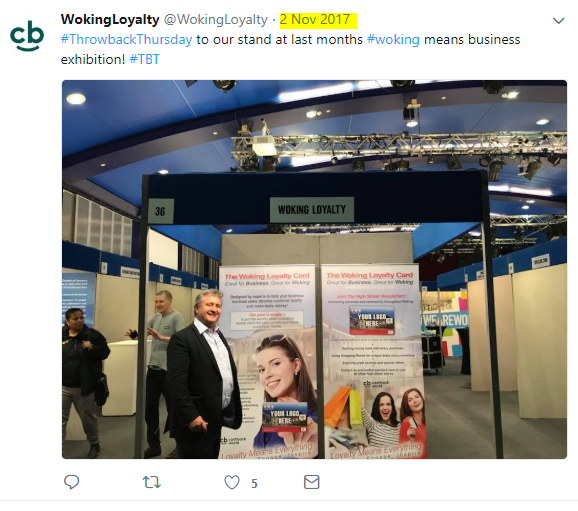 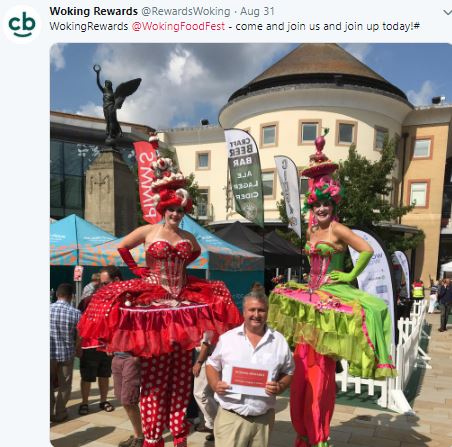 The new, updated website has a list of local businesses who have no doubt joined the Woking Loyalty Card Scheme because a local Councillor, the local Government Council and the local newspaper have all endorsed it.

I wonder if anywhere in the sales pitch, Woking Council mentioned that they'd be taking a cut from the sales proceeds and that the company backing the scheme has been legally declared a Ponzi Scam in at least three countries?