Futurenet/FuturoCoin - Why Do Stephan Morgenstern and Roman Ziemian Have Diplomatic Gambian Passports? 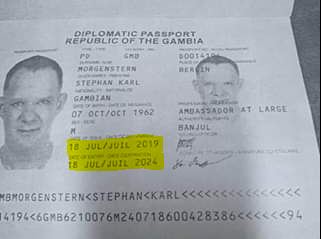 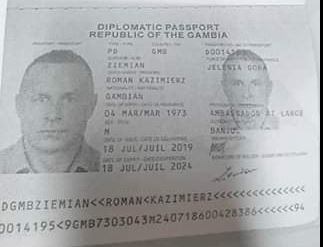 So why would Stephan Morgenstern and Roman Ziemian owners of FutureNet/FuturoCoin want a Diplomatic Gambian passport? Because if you have a Gambian Diplomatic Passport you have access to over 80 countries without the need for a visa. And it looks like Gambia have been issuing Diplomatic Passports like jellybeans in exchange for money - and Roman and Stephan certainly have plenty of that!

'There are legitimate questions here, if, in fact, those appointees are salaried, and on what terms and conditions of issuing diplomatic passports. Looking at the Vienna convention on diplomatic relations (1961), clearly, Jammeh has overstepped the process by issuing the country’s privilege papers in exchange for monetary favors. Not again, and Foreign Minister Darboe is on notice that Gambians are taking a closer look. For accountability purposes in view of a ‘Freedom of information bill’ soon to be introduced in parliament, pro-democracy groups aim to put in periodic requests of all persons issued with diplomatic passports, bar ‘REAL’ ambassadors.'


In March 2019, The Office of Competition and Consumer Protection in Poland warned people against joining Futurenet and charged Roman and Stephan with running a Ponzi scam. To my knowledge, this is yet to reach it's conclusion:


'The Office of Competition and Consumer Protection suspects that there are systems on FutureNet and FutureAdPro websites that can be pyramid type promotional systems. Consumers may lose their money. Therefore, we officially warn you: do not buy the packages offered, do not enter friends into the system . For risky investments, among others at FutureNet and FutureAdPro we've been drawing consumers' attention back in 2017.

Two companies manage websites: BCU Trading from Dubai and Futurenet Ukraine from Lviv. UOKiK initiated proceedings against them and charged them . Services are also interested in the District Prosecutor's Office in Wrocław, conducting the investigation under the reference number PO 2 Ds. 63.2016.

FutureNet and FutureAdPro promise "profits" for someone persuading other people to buy participation packages that cost from $ 10. up to even over 1 thousand dollars. - Both companies make benefits dependent on the fact that someone will recruit more participants. The system will stop working if other people do not join it. Usually, in this type of schemes money goes mainly to the originators of the pyramid - says Marek Niechciuk, president of UOKiK.

UOKiK's proceedings regarding violation of collective consumer interests may end with a decision imposing a financial penalty of up to 10%. company marketing. The Office may also order the company to discontinue adverse practices and remove their effects.

How do you know the pyramid?

The scheme of operation of the pyramid is as follows: you deposit money, then recommend other people for whose introduction you receive a salary. It comes from the contributions of people you have directly and indirectly recommended. This way you, your friends and acquaintances are financing the pyramid . However, after some time the system must collapse, because the money paid in is not invested in any assets and does not bring profits . They reach the organizers of the pyramid and people who occupy a higher position in the pyramid chain. The system works as long as more money is deposited than withdrawn. The condition is, however, that the number of people participating in the pyramid increases dramatically - such a steady, avalanche increase in customers is not possible. As a result, the pyramid falls down,your money is forfeited, and if you have introduced your friends or family also their money. Contact with the owners is broken. Pyramid systems are masked with the slogans "program", "investment", "making money online", "making money at home", "advertising platform". Report fraud to law enforcement agencies (police, prosecutor's office).

Pursuant to the Act on competition and consumer protection, UOKiK issues a consumer warning when it has reasonable suspicion that an entrepreneur is using an illegal practice that may expose a wide range of consumers to significant financial losses or adverse effects . Warnings are posted on the office's website .

Also of interest is this notice issued by Futurenet in August, in which they appear to have sold the Advertising Pack business:

'On August 10th 2019, the legal effects of the agreement on the transfer of rights to the FutureAdPro Platform formerly owned by the company BCU Trading LCC based in Dubai came into force. Therefore the new owner and administrator of the FuturenetAdPro Platform is FTO Box Information Technology Services, Office TBA , Building 1565, Road 1722, Diplomatic Area Manama 317 PO Box 20705 , Kingdom of Bahrain. As a result, FutureAdPro is no longer part of Futurenet.'


So it looks decidedly like Roman and Stephan are getting ready to run...watch this space.

Press Release
Gambia Government Makes Significant Progress in Diplomatic Passport Investigations
Banjul, The Gambia—Following intense investigations into allegations of fraudulent procurement and acquisition of Gambian Diplomatic Passports, The Gambia Government working with our international partners, is pleased to report the arrest of several people in Germany who are currently providing pivotal information to the authorities. Similar arrests of culprits in The Gambia have also, yielded significant leads into this vast and sophisticated criminal network that risks damaging the good reputation of our peaceful and law-abiding country.
Ever since news of the Diplomatic Passports emerged, Government quickly established a Task Force comprising officials of The Gambia Police Force, Immigration Department and the State Intelligence Services(SIS) to adequately probe the matter and prosecute all those found complicit in the sale, procurement, manufacture and illegal acquisition of The Gambia’s Diplomatic Passports. The Task Force will also, conduct a complete inventory of all Diplomatic Passports issued since 2016 with verifications of all their holders’ profiles.
Thus far, over a dozen citizens and non-citizens have been apprehended and as the investigations widen, numerous more suspects may either be arrested or be called in for questioning to help the Task Force shatter this criminal cabal and restore sanity in the entire process. Members of the public are urged to fully cooperate with investigators and where possible, to provide crucial information that may be helpful to the Task Force.
Under Gambian law, the issuing of Diplomatic Passports rests exclusively with the Presidency and those that acquired their passports legitimately by using the established procedural channels are not the subject of this criminal inquiry. The probe targets those who knowingly acted illegally by falsifying documents, aiding and abetting in the sale, procurement and acquisition of this precious national document for all the wrong reasons.
President Adama Barrow as the singular Approving Authority of Diplomatic Passports has instructed a full, swift and comprehensive investigation to break the neck of the criminal cabal bent on tarnishing the good image of The Gambia. Mr Barrow has made it categorically clear that “there will be no sacred cows; no one will be spared in these investigations regardless of ones position and all those found wanting, will face the full extent of the law”.
Therefore, conscious of the gravity of the situation and its potential ramifications vis-a-vis The Gambia’s international obligations under UN Security Council Resolutions, the Ministry of Foreign Affairs (MOFA), will soon convene a meeting with members of the Diplomatic and Consular Corps to immediately address this and similar pressing issues.
Signed:
Ebrima G. Sankareh 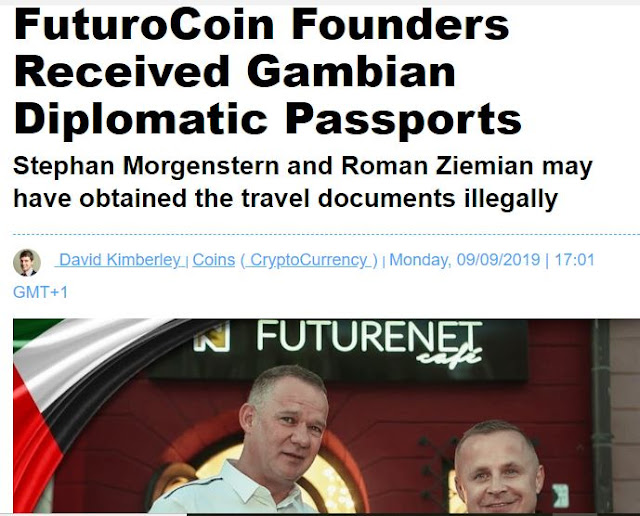 F1 and Red Bull will have egg all over their shiny cars now!

It's being reported that the tennis star Boris Becker has also managed to acquire a Gambian Diplomatic Passport:
https://www.spiegel.de/international/world/investigators-target-trade-in-african-diplomatic-passports-a-1286643.html
Posted by TARA at Saturday, September 07, 2019